Dr. Christopher M. Bell is a Professor of History at Dalhousie University in Halifax, Nova Scotia. He received an MA in War Studies from King’s College London in 1992, and a PhD in history from the University of Calgary in 1998. read more

See the latest posts on Dr Bell's publications, naval history, Winston Churchill, publishing, and whatever else happens to be on his mind. read more 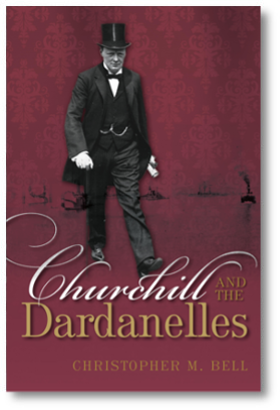 Churchill and the Dardanelles
Now available!

'This is quite simply the best naval history book that I have read this year. ... It is quite superb in virtually every way. ... It deserves a wide readership. If you think that you know all there is to know about Churchill and the Dardanelles, I suggest that you think again.'

'Bell explores the subject afresh and does so with such mastery that the tenor of his judgments rings true. … In clearing away a mass of historical debris from the scene, Bell has achieved for Churchill and Gallipoli what David Reynolds accomplished for Churchill and the Second World War, the excavation of a man from the myth that he created.'

'Bell's historical judgements are balanced and fair. He has made a major contribution to British naval history and to a clearer understanding of that towering twentieth-century political figure, Winston Churchill. Bell's book will stand as the definitive study of the Dardanelles campaign and the central role of Churchill for many years to come.'

'This is a well-written and important book which adds valuably to the literature on Churchill himself and to the strategic history of the First World War.'

'Christopher Bell's knowledge of the sources cannot be bettered, and he has shown himself to be the ideal person to present this important, accessible reassessment.'

'impressive and readable' 'Churchill and the Dardanelles is an important and balanced book. ... For anyone interested in Gallipoli, or Winston Churchill, it is essential reading.'

“The blame-shifting, name-calling, and finger-pointing were not stilled by an exhaustive Dardanelles Commission inquiry and its 1919 report, but should now finally come to an end a century later with the publication of this well-researched, very well-written, but above all judiciously objective book by the distinguished naval historian Christopher M. Bell… This excellent book cuts through a century of pro- and anti-Churchill writing to reach remarkably balanced conclusions.”

“This immaculate study of the First Lord of the Admiralty’s disgrace – and comeback – is definitive. ... Bell’s book shows brilliantly how events over a few weeks in the spring of 1915 affected the history of decades to come. Unlike most additions to the Churchill bibliography, it is truly valuable.”

“In this highly readable and comprehensive treatment, Christopher M. Bell treats the evidence with forensic care and delivers arguments that are consistently nuanced and fair. The book casts new light both on Churchill himself and on the wider question of civil–military relations during World War I”

-- Richard Toye, author of The Roar of the Lion

"fascinating ... a marvellous book" " It is wholly recommended to all students of World War I, of Churchill, and of political systems under pressure."

"Bell supplies answers in this illuminating and fluent analysis of one of the most controversial and emotive episodes of the First World War."

“admirably balanced” “superb” "a clear and authoritative account about Churchill’s role in the Dardanelles offensive. Bell’s style is easily accessible for the armchair strategist but is equally thorough and well footnoted for the weathered naval historian. Everyone can appreciate the enormous efforts and herculean tasks Bell undertook to disentangle the reality of the Dardanelles from its various narrative myths."

“Bell is careful to specify what we know and what we don’t know, and his reliance solely on corroborated sources and written records makes it easy to believe that his research is as unbiased as possible. This is both an excellent study of the campaign itself and a good account of how memory can be utterly twisted in both deliberate and unconscious ways.”

“commendable" "as definitive an answer ... as we are ever likely to get"