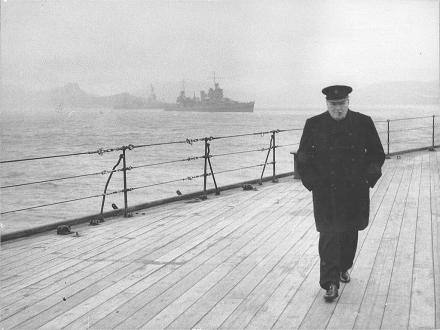 The only down side to this deal was that I felt an obligation to repay the publisher’s faith in me by producing a manuscript that was both academically rigorous and reasonably entertaining. I had no concerns about the first requirement, but as I worked over the next year and a half to finish up the manuscript, I became more self-conscious than ever about my writing. For the previous twenty-plus years, my main goal as a writer had been clarity and precision. In the classroom, I tried to make my lectures as colourful as possible, but on paper I maintained a very formal demeanor. The target reader I consciously or unconsciously geared all my writing towards satisfying was my PhD supervisor. Even a decade after collecting my degree, it took a real effort to break out of that habit – and to this day I can’t bring myself to write anything I know will make my former supervisor cringe. But as I finished up Churchill and Sea Power, I found myself thinking more and more often about how the chapter I was working on at the time would read to the history buff who might pick up a copy of the book purely out of interest in naval history or Winston Churchill. I certainly never expected the book to read like a new Harry Potter novel, but at the very least I wanted to make sure the casual reader could make sense of the arguments, learn a few things, and hopefully find the process entertaining and rewarding. Nothing that would help me accomplish those goals would make the book any less valuable to academics and specialists.

The production of a “trade” book was not much different than the production of an academic book. And I was lucky that Oxford University Press was able to straddle both publishing worlds, so that nothing had to be sacrificed. Even better, they were committed to the very highest standards in everything we did. The only really new dimension to the production experience stemmed from the decision to include photographs. I was not a complete stranger to the process. We had incorporated images into Naval Mutinies of the Twentieth Century, but the publisher had given us no photo budget for that book. They made it clear that reproduction fees for any images we used would have to be borne by the editors themselves. So we relied on our contributors to supply public-domain images we could use for free. And looking back, I think the results were pretty impressive. But I was excited to see what I could do now that I had a budget to work with.

I spent several weeks dipping into online photo archives to find the very best images. And there were plenty to choose from: pictures of Churchill with famous admirals, inspecting ships’ companies, on the deck of warships large and small, and many more. I made up my top twenty wish list, along with a small batch of alternatives that I thought the editors might prefer. A few weeks after sending the package off, I got a breakdown of the publishing fees. My wish list would cost almost three times what the publisher was willing to cover. I could either pay the difference myself – around £1400 out of my own pocket – or find cheaper pictures. So I started the process over again, and really began to scour the archives. I accepted that a few of my top choices were simply too expensive to use, and resigned myself to going without them. But I now knew which commercial archives were the least expensive, and tried to make more use of their collections. In many cases, I found that the rights to a particular image were being offered by two or three different commercial suppliers. This allowed me to shop around for the best deal, although I have a feeling that none of them actually owned the copyright to the image. But they had high quality copies suitable for publication and I didn’t – so if I wanted to use them, we would have to pay them to provide a copy.

I also widened my net, looking for museum and government collections that might have some obscure gems – and be less profit-motivated. This worked out very nicely. Most government archives do not charge any fees to reproduce their images, and this helped bring the cost down considerably. Some other nice images turned up in museum collections for only a nominal cost. One archivist even offered a picture from his personal collection. One of the biggest frustrations, however, was the cost of using images from the Imperial War Museum, which has a truly phenomenal collection. My original wish list had included around six of their photographs, but the licensing fees had recently been revised to the point where they were over twice the price from many commercial photo agencies. I was prepared to go without any, but ultimately was able to convince the museum to reconsider its new rates. I still couldn’t afford all the ones I wanted, but I was able to get a few of my favourites.

The final selection of images is, I think, definitely superior to the first batch I submitted. The extra effort allowed me to turn up some fantastic pictures and illustrations I had missed the first time around. And I was able to come in very close to the publisher’s budget. The hardest thing, in the end, was narrowing it down to just twenty. There were some great photos, illustrations, and cartoons that had to be left out. Having put so much time and effort into locating them, it seems a shame to waste them. I’ve been toying with the idea of putting together one day a lavishly-illustrated coffee-table style book called Winston Churchill and the Royal Navy: An Illustrated History, or something along those lines. Interested publishers might want to contact me now – before I get myself an agent again and my demands go up!