One of the first differences I noticed with this new book was the promotion. My previous publishers had done what they typically do with academic books – otherwise known as ‘the bare minimum’. They listed them in their catalogues, on their websites, and sent out review copies to maybe 25 or 30 academic journals. And that was it. But with Churchill and Sea Power, I had many friendly emails from the promotion and marketing people in both the UK and the USA to discuss ideas for promoting the book. Among other things, they sent out advance readers copies (a sort of stripped-down, no frills paperbound copy of the book) to generate interest before the book was even available for sale.

Typically, it is about a year after publication before reviews begin to appear in academic journals. And it is not unusual for reviews to trickle out two or even three years after publication. So it was a treat to see reviews of Churchill and Sea Power before the book was on the shelves. The first one I encountered was an unattributed piece in a publication called Publishers Weekly. I suppose it’s a sign of my inexperience with the publishing world that I had never heard of this periodical before. I’ve since been told that a positive review there carries a lot of weight, and I can now see why. This short review is cited almost everywhere – both as a review and, in some cases, as a description of the book’s contents. Many thanks to the anonymous reviewer for judging the book to be an “illuminating study”! http://www.publishersweekly.com/978-0-19-969-357-3

As a lifelong bibliophile and book collector, I couldn’t resist asking the publisher if they could send me one of the advance readers copies, which they very kindly did.

Early reviews popped up in a variety of interesting places for the first few months. Sometimes I would have advance warning. The publisher told me, for example, to expect a review in the British magazine Standpoint. Again, this was not a publication I was familiar with. The issue was due at the end of a research trip to the UK, and I searched for a hard copy in the shops at Heathrow airport before I flew home, but nobody had one yet. Fortunately, the full review was posted online. I was surprised to see that the author was Conrad Black, who described the book as “authoritative and rigorous, … a good read for naval history buffs.” My thanks to The Rt. Hon. The Lord Black of Crossharbour. (standpointmag.co.uk/books-january-february-13-master-and-commande...)

There have also been some unexpected opportunities to promote the book in person. The marketing people in New York asked if I’d be willing to give a talk on my book on 31 January at the United States Navy Memorial in Washington D.C. Naturally, I said yes. It was a great chance to get some feedback, sign a few copies, and do some sight-seeing. Thanks in part to advertising by the Churchill Centre, the event was well attended and I got to meet a nice mixture of naval buffs and local Churchillians. Lee Pollock, the executive director of the Churchill Centre, was also there. Afterwards, Lee and I had a fascinating trip to the US Naval Academy in Annapolis with Admiral Mike Franken, the first captain of the USS Winston S. Churchill back when the ship was launched in 2001.

I popped into a Barnes & Noble a few blocks from the White House the next day before heading to the airport and found three copies of my book sitting on a trolley waiting to be shelved. Sadly, the novelty of seeing my book on the shelves had still not worn off! I offered to sign them, and the manager mentioned that the book had sold quite well over the holidays, so these were obviously not (as I initially thought) the first copies to pass through their hands.

My next promotional talk was here in Halifax, at the Maritime Museum of the Atlantic, which very kindly hosted a “book launch” for me on 7 February. I was quite pleased a few days before when the Halifax Chronicle-Herald ran a very nice review: thechronicleherald.ca/books/621052-ultimately-right-but-sometimes.... The write-up in the local paper probably helped generate interest, and attendance at the book launch was quite good. 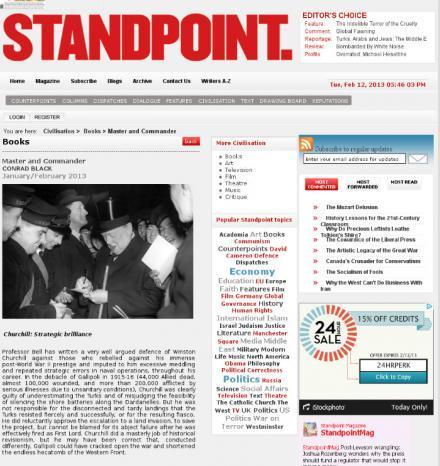