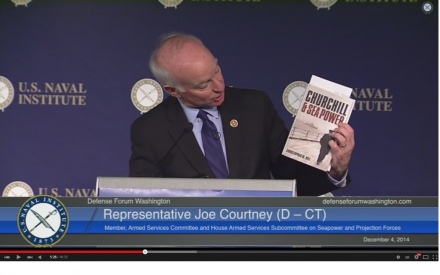 Drawing “lessons” from the past is never as straightforward as it might seem. As a general rule, statesmen and policy-makers will benefit from a knowledge of history, but it can be painful, if not just embarrassing, to watch them invoke the “lessons of history” to support a particular course of action. It is just far too tempting – and easy – to draw selectively from the past to find justification for the things they are predisposed to do anyway.

Churchill and Sea Power was not designed to hit readers over the head with any particular “lessons”, although I certainly hoped that modern-day policy-makers would find the book stimulating and useful. At most, I wanted to highlight a few useful points that are frequently overlooked. One of these is that the history of a nation’s sea power is only partly told in terms of the outcome of great battles, the skill of its officers and sailors in uniform, and the fighting power of its ships. As I state near the beginning of the book,

One of the most astute observations in Alfred Thayer Mahan’s classic study, The Influence of Sea Power upon History , first published in 1890, is that a nation’s sea power – that is, its ability to use the seas, in times of peace and war alike, to further its ends – also depends on the actions of its civilian statesmen and politicians. They are the ones, after all, who decide how much of the nation’s wealth to allocate to navies and the other elements of sea power, who determine broad priorities in wartime, and who have the final word in matters of peace and war.

This seemed an obvious point to make in a book about sea power told from the perspective of a career politician, but it is not something that readers and reviewers have commented on. I was gratified, therefore, to hear the passage above in a recent speech by Congressman Joe Courtney (D-Conn.), a member of the Armed Services Committee and the House Armed Services Subcommittee on Seapower and Projection Forces, and Co-Chair of the Congressional Shipbuilding Caucus. Courtney was speaking at the US Naval Institute’s Defense Forum in Washington D.C.