Schmoozing with the Publisher 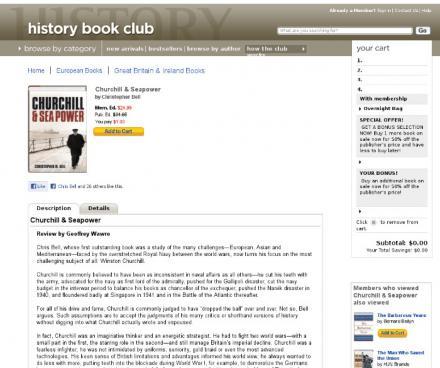 During my research trip to the UK I was invited to a lunchtime meeting with editors and marketing people at the Oxford University Press offices. I was delighted to discover, a few hours before the meeting, that Churchill and Sea Power had been picked up by the History Book Club. I had (and still have) no idea exactly what this will mean in terms of sales, but I was pretty sure that this was a good thing. They offer copies to members for $24.99, and new members can pick one up for only $1. That’s hard to beat! Presumably they order copies in bulk, although whether that means 50 copies or 500 I have no idea.

Even more gratifying, I think, was the great review on their website by the distinguished military historian Geoffrey Wawro, Professor of Military History at the University of North Texas, and Director of their Military History Center. I’m guessing this piece must have been commissioned by the Book Club. The review concludes with:

“What makes this book so readable and rewarding is its taut, paced development of Churchill as thinker, politician and Whitehall servant—we see his strategic world-view developing and we read his remarkably incisive, beautifully wrought appreciations of strategic dilemmas and problems. He was a vivid writer and clear thinker, and Bell has done the profession (and Churchill fans everywhere) a great service with this captivating text.”

Thank you, Geoff! The full review is available here: http://www.historybookclub.com/european-books/great-britain-&-ireland-bo...

In any event, I walked into the Oxford University Press building that day feeling like I had earned my free lunch. It was great finally meeting many of the people I’d been corresponding with for the last couple years. They seemed pleased with how the book was doing, and very interested in my next project (more on that later). After lunch, we filmed a couple short promotional videos which are now available on YouTube.

Postscript: scrolling through the History Book Club’s list of “Top 100 bestsellers” in February 2013, I see that Churchill and Sea Power is sitting at a very respectable #49 (but also that I am trailing behind each of the three volumes of the Manchester/Reid “Last Lion” biography). I spotted Churchill’s WWII memoirs on the list as well, which means that no fewer than five of their top 100 books at the moment are either by or about Winston Churchill.